September may have come and gone while we’re already preparing for Halloween festivities and dare I say, the Christmas season, the month still brought some important news in the world of digital marketing.

As usual, Google owned the headlines with a series of news including the proper release of Search Console, a tip for posting third-party reviews on your website, and the acknowledgement that things could be better for European users in Search.

While one company owned the SEO news, it was the topic of shopping that took over the social media landscape this past month. Several big names announced features that will make it easier for users to find products . They also hinted at plans to even further integrate shopping with social media in the near future.

For those stories and more, here’s the best of what happened in digital marketing in September 2018.

The latest version of Google Search Console officially graduated out of its beta phase in early September, and it arrived on the scene with a couple new updates, too.

First, Google has made it easier to see if any serious problems have come up on your site (mainly, active manual actions and security issues) by placing alerts directly on the Overview site. The Manual Actions report also got a new coat of paint.

Google’s URL inspection tool was updated, too, and can now be used to test the health of a live page on your site. This should help webmasters better understand and fix any issues identified by the tool. Once the page has been properly repaired, it can be submitted for recrawling and indexing by Google.

If you’re still using the older Search Console and want to migrate to the new version, you can learn how to do that over on the Search Console forum.

If your company is receiving reviews on third-party sites like Yelp and you want to highlight the copy on your website, here’s some good news: you can absolutely do it. Google won’t view it as duplicate content and it’s fine if you’re using it to provide context, according to Google’s own John Mueller.

Mueller did note that the original review will likely rank for anything related to the review text, and that webmasters should not post these reviews with any structured markup. Using that markup would go against Google’s own review guidelines, so you’re better off just pasting the text itself or, as Mueller suggested, using an iframe or embed of the review.

20 things you didn't know you could do with Search

Google Search has become much more than just a search engine over the years, and the company wanted to make sure users are well aware of everything you can do beyond, you know, performing a search.

As part of a list of “20 things you didn’t know you could do with Search,” Google pointed out ways you can save time, use the tool as a sidekick of sorts, and help you make crucial decisions. From currency conversions to buying movie tickets to searching with an image, there’s a lot you can do in Search that you may or may not be doing already.

If you want to learn how to get the most of your searches, read the full list over at Google.

In addition to causing full inboxes and other headaches around the digital world, GDPR has led to poor user experiences for Google Search users in Europe who attempt to access certain U.S. websites. The problem is that nearly one-third of American news sites have blocked EU searchers, despite the fact that the listings for those sites are appearing in search results.

One particularly frustrated user reached out to Google’s John Mueller on Twitter about why this was happening, and Mueller responded by saying that it’s because Google “primarily [crawls] from the US.” He admitted that it’s a bad user experience and that the company is looking into ways to combat the issue.

We’ll be sure to keep an eye on this and provide an update if anything changes.

Speaking of bloated inboxes, Google sent out another batch of mobile-first indexing notifications during mid-September and it may have been the largest batch yet. Search expert Barry Schwartz drove this point home with a screenshot of his own inbox that was full-to-bursting with notifications—and he wasn’t alone.

Google started sending out these emails this past March and then trickled them out to webmasters as the months went by. This is, again, the biggest batch of notifications thus far and shows that the mobile-first index is becoming more widespread. 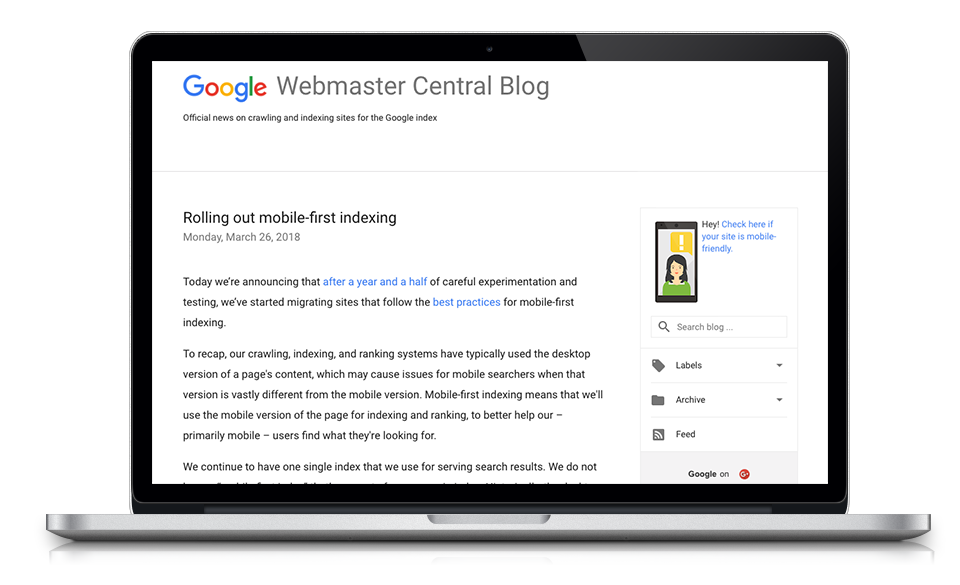 In case you aren’t familiar with mobile-first indexing, our own Tamar Batrawi explained the index, how it works, and what it means for SEO in a blog post earlier this summer.

According to Google, one third of shoppers the companies surveyed said that they searched for images of items prior to actually shopping in a physical store. With that in mind and noticing the continued relevance of online influencers, Google rolled out the new Shoppable Image ads.

These ads will appear on content that’s curated by Google’s publishing partners. And in the example given by the company, it all seems quite simple: A user views an image of a curated product on a popular fashion blog, clicks on the “tag” icon within the image, and can then see a selection of similar products.

Google plans on expanding this integration to Image Search in the near future.

Visual search and shopping on Snapchat!

We have another bit of shopping-related news from the photo-sharing platform Snapchat, which is testing a new feature that allows users to find and buy products directly through the app’s camera.

This new feature is as straightforward as it sounds: point the camera at a pair of shoes or a product’s barcode, and if everything goes according to plan, you’ll receive a prompt to buy it on Amazon. You’ll either be taken to the Amazon app (if you have it on your device) or the website itself.

There’s no word on when this will be available for all users, nor is it clear exactly how many users can access this feature just yet.

What’s that? More shopping-related news in the social media world? That’s right, Instagram has news, too. The platform has made it easier for users to buy products they fancy in other people’s posts and for approved companies to integrate their products into the Stories and Explore tabs.

Instagram says that more than 90 million user accounts have been clicking on the “reveal” tabs on posts every month (per their own April 2018 data), so they no doubt saw this as another way to integrate the shopping experience into the app.

This feature—and the Snap and Google Ads bits, for that matter—makes complete sense, and it’ll be interesting to see how else Instagram plans to “enhance the overall shopping experience” on the app moving forward.

We’re excited to announce that leading analytics consultancy, LeapThree, are now part of the Ayima Group family! Find out more about this exciting news and what opportunities it brings to Ayima and our clients in the full announcement.

Why Google Shopping is more important than ever