How Two Agencies Won the 2016 Olympics

The amount of content created around Christmas, international football tournaments or the latest James Bond movie show that brands love a bandwagon. However, there are very few campaigns that manage to make more than a ripple in the media.

That was never going to phase us when tasked by US adult toy retailer Adam & Eve to use the Rio 2016 Olympics as a campaign hook.

Last night, their hard work was rewarded with a gold medal for ‘Best Opportunist Marketing’ at the Guardian-backed DoDifferent awards. 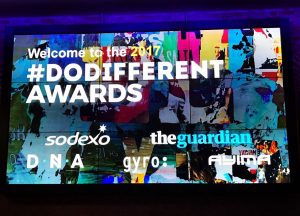 “Adam & Eve are at the risqué end of the brand scale which makes any kind of digital marketing activity tough.” explained Danny Chadburn, our Head of Content “While sex always sells, you can’t rely on organic shares to help spread the word when the topic is of such a private nature.”

“We know our strengths lie in SEO and Content Marketing, but we’re also not averse to enlisting the help of other specialist agencies when big campaigns come around.” said our Managing Director, Nicky Applegarth “We joined forces with Dynamo PR to help craft compelling content that would attract the world’s media like moths to an Olympic flame.”

In early 2016, Ayima and Dynamo put together plans for an accessible, yet conclusive study on the relationship between sex and athletic performance. They wanted to find out if Usain Bolt should conduct his infamous Olympic Village antics pre- or post-race.

Paul Cockerton, CEO of Dynamo PR was very pleased with the data, “The results were enlightening, showing a clear correlation between the perception of sex on performance and the actual test results. This gave us the ammo we needed to craft a story ahead of the world’s biggest sporting event.”

The first piece of coverage came the week before the opening ceremony and the story continued to gather pace, ultimately trending on Buzzfeed at the peak of the Games. 40 articles from giants such as Yahoo, MSN, Maxim, Mic, Sport Bible, Loaded, Women’s Health, Cosmo and Glamour offered 14,000 shares from social profiles with a combined reach of over 50m.

Kristina S Smith, Channel Marketing Director for Adam & Eve was chuffed with the outcome “It’s not every day you receive an email from your agency saying that your content article is #1 on Buzzfeed. Or on the home page of MSN. Or on the homepage of Yahoo…but I have, and I have to say that it’s an amazing feeling!”
Commenting on the award, our CEO Mike Jacobson said “The resounding success of this campaign shows that it is possible to get traction for any event, so long as you're willing to take a unique angle. I hope we won’t have to wait another four years for an opportunity like this to present itself again.”