Insights >Insights >The April Digital Roundup
<Back to Insights

Privacy issues related to social media continued to dominate the news cycle around the globe, and the world of digital marketing was not left out of the discussion. These ongoing conversations are especially relevant as we get closer to the mandate of General Data Protection Regulation (GDPR), which goes into effect in May.

There were plenty of other notable happenings in the marketing landscape, though, such as Google’s consistent tinkering with AI and mobile search, and Instagram’s latest swipe at (and from) its opposition. Get everything you need from those stories and others in the latest edition of our Digital Roundup.

If you’re hosting job listings using the “JobPosting” Schema markup, Google has a message for you: stay on top of your expired/filled listing or else you may receive a manual action penalty. At least, that’s what the search giant explicitly stated in its Job Posting guidelines. 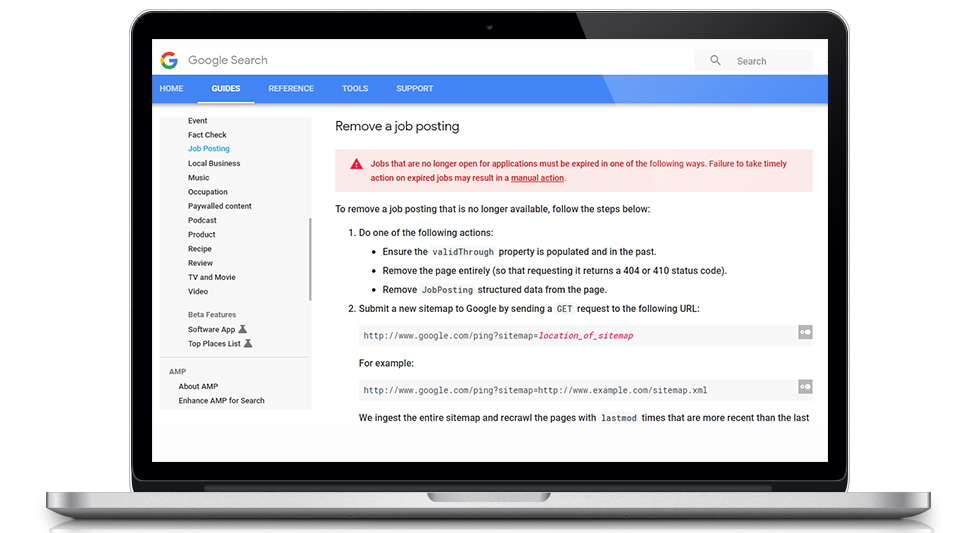 Any job listing posted with “JobPosting” markup that is no longer open must be removed in one of four ways: delete the page entirely, add a “noindex” meta tag, remove the Schema markup, or make sure ‘the “validThrough” property is populated or in the past.’ If you fail to do this and Google catches wind of it, you could get hit with a penalty.

Of course, there are doubts around the web about exactly how they’ll stay on top of this—cross-referencing other job sites? Relying on user reports? However, this does seem like a big benefit for job seekers who are tired of applying for a dream job only to find out it was filled months ago.

Mobile users entering search queries on Google may have noticed a new SERP format throughout the past month that does away with the concept of multiple pages. Instead of clicking through to see the next page of results, some users can click a button with a down arrow that provides an infinite scrolling option that keeps everything on the first page.

Google’s public search liaison, Danny Sullivan, confirmed the new feature in a tweet in early April, but it’s yet to be confirmed as a permanent change for the search engine. Some writers are wondering if this could change the way the Search industry defines “Page One” for mobile users, but it’s really just a game of “wait and see” right now until Google sticks with or abandons the infinite scrolling feature.

Google’s latest development in semantic search allows users to have conversations with books—literally. By entering questions or simple statements into the “Talk to Books” feature, you can receive a relevant reply from one of more than 100,000 works thanks to the handiwork of Google Director of Engineering Ray Kurzwell and his team. 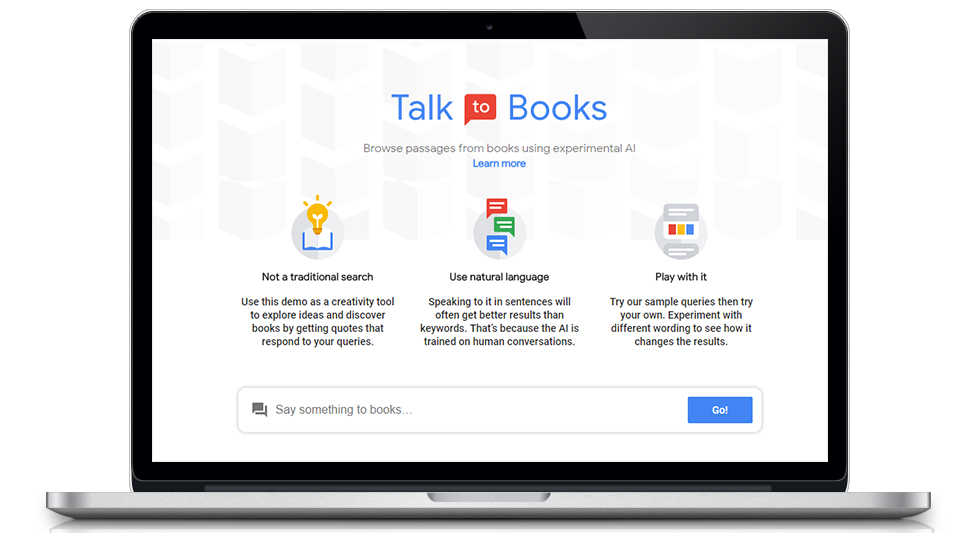 In a blog post, Kurzwell stated that this is a step forward for semantic search and the related AI technology, and also for the way in which we interact with books. Talk to Books currently allows users to either try out sample queries, such as “How can I stop thinking and fall asleep?,” or enter their own to explore ideas and simply experiment with language.

Go ahead and give it a try for yourself, or read more about how (and why) it all came together.

The social media battle continued this past month when Instagram began “Nametags,” a new feature that closely resembles Snapchat’s Snapcodes. While only in its early stages (per TechCrunch), Nametags could be an interesting new development for the way that any Instagram user (including marketers) acquires new followers.

In theory, someone could create their Nametag code and then promote it offline by adding it to printed marketing material (posters, shirts, etc.). An Instagram user would just need to scan it using the QR scanner function and, boom, new follower.

Snapchat’s own similar feature, Snapcodes, has been around since 2015, but anyone following Instagram v. Snapchat knows that this isn’t the first idea to cross between to the two platforms. It likely won’t be the last one, either.

You can now send GIFs within LinkedIn Messenger, but why?

As of mid-April, LinkedIn became the latest social platform to integrate GIFs into its messaging system. It’s part of a partnership with the Tenor, a GIF platform that was recently acquired by Google. And just like that, your conversations on LinkedIn Messaging just got a whole lot more like, well, your conversations on just about every other platform out there—as in, filled with your favourite animated graphics.

According to Tenor’s blog, they found that LinkedIn Messaging usage grew by 60% in the past year. The company also found that a majority of US adults they surveyed utilise visuals, such as emojis and GIFs, in their digital conversations. So, what better way to appease those same people by allowing them to send GIFs when speaking with their manager, right?

Some critics aren’t sure exactly why this new feature was added to LinkedIn given its branding of being a more professional digital environment—who is actually going to send a Minion GIF (for example) to a prospective employer? However, considering that GIFs are integrated into nearly every other communication platform, it was only a matter of time.

While this initiative may not impact your marketing efforts just yet, it will be interesting to see if we get some GIF-focused strategies headed our way on LinkedIn in the near future.

Issues surrounding Facebook’s privacy policies remained in the news as the social media giant began asking its European and Canadian users to opt in or out of its facial recognition technology. This of course comes hot on the heels of the huge Cambridge Analytica scandal in the States, but also relates to the impending GDPR laws in the European Union that go into effect 25 May.

Among other things, the GDPR forbids companies from using “pre-ticked boxes” in consent forms that must be written in plain language. This will apply to more than just the facial recognition tech, and it’s where things get especially interesting for digital marketers. As explained on Facebook’s blog, the company will ask its users to decide whether they want specific information to be shared with third parties as part of targeted advertising campaign. This includes political, religious and relationship info in addition to data from Facebook-integrated apps and websites.

How exactly this will impact Facebook advertising efforts remains to be seen, but expect to hear more about this from us at Ayima very soon.

Twitter is also preparing itself for the new EU laws and announced that it will implement an overhauled Privacy Policy that goes into effect the same day as GDPR (25 May). The new policy replaces the technical legalese with plain language with the goal of providing more transparency, especially at it relates to personal data. 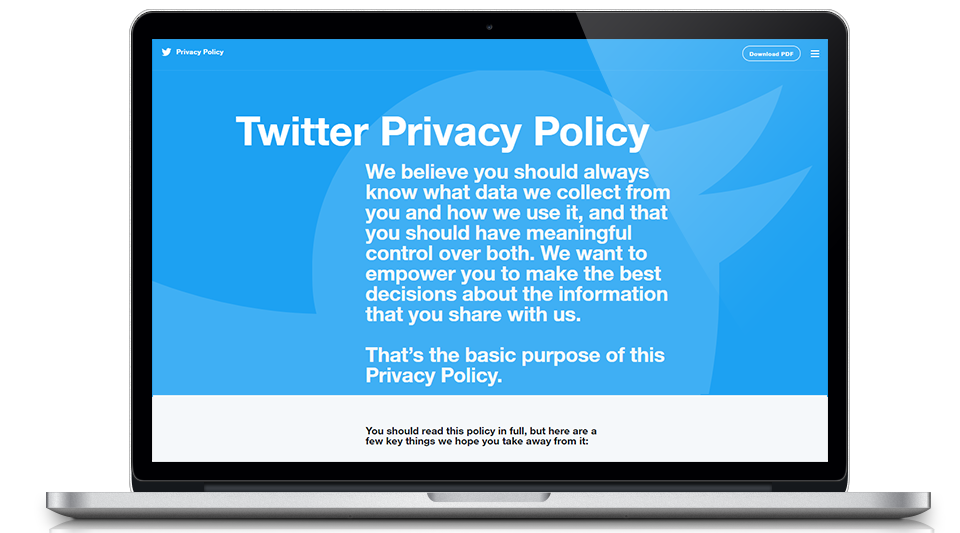 That point about data was driven home by Twitter Data Protection Office Damien Kieran, who explained in a blog post that “it’s absolutely essential that [users] know exactly what we mean when we refer to location data or data from advertising partners.” The revamped policy also includes better navigation within the copy itself in addition to links to relevant sections of user settings, so users can adjust their privacy settings more easily.

You can view the updated Privacy Policy for yourself and learn more about the changes via Twitter’s blog. It’s important to note that while these changes coincide with GDPR, they will apply to all global users. 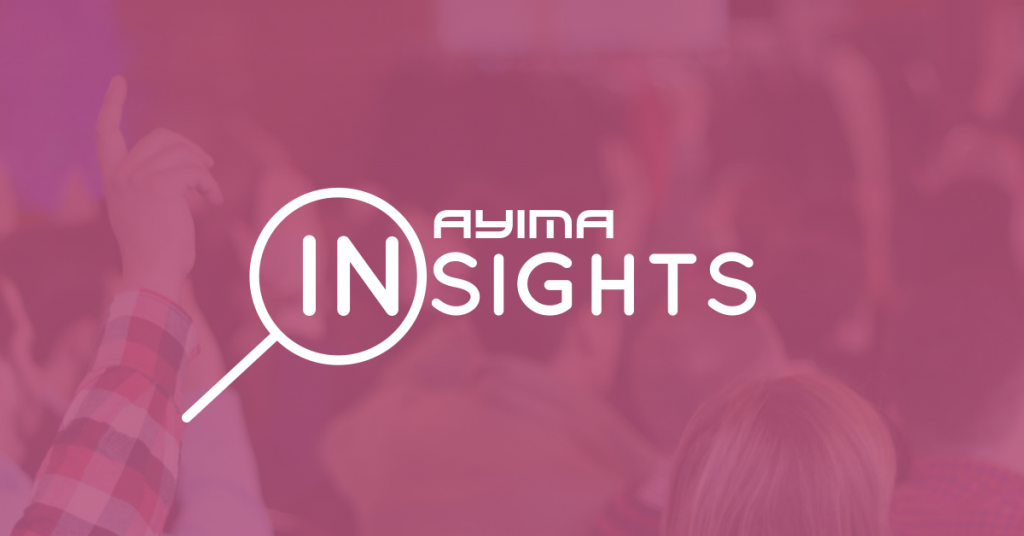 Our training courses are currently offered in both London, UK and Vancouver, Canada and but expect to see them rolled out across New York, San Francisco and Raleigh very soon!

If you're interested in becoming an expert in an area of digital marketing or simply want to top-up your already incredible set of marketing skills, check out our courses and sign up today!