In 2015, Google released its machine learning algorithm “RankBrain” which was confirmed by Google’s senior research scientist Greg Corrado as the third most important ranking factor in a Bloomberg article, signifying the increasing importance of AI in Google’s systems. Google has also been one of the main backers of AI-research and invested heavily into the field in recent times. This gives not so subtle hints about how the future of search is shaping. A qualified speculation is that Artificial Intelligence is going to play a significant part in it.

What is Artificial Intelligence and who is using it?

Artificial Intelligence is a field of science which has grown exponentially in the past few years, both in popularity as well as in scientific advances and applications. Tech giants such as Google, Microsoft and Apple have all made AI an integral part of their business and implemented it for numerous tasks their users perform daily. Whether you’re talking with Apple’s Siri, searching on Google, using voice commands in your phone, tweeting with Microsoft’s (due to a few misdemeanours now cancelled) Twitter robot or even getting music recommendations from Spotify – you’re subject of some sort of artificial intelligence- or machine learning algorithm. Machine learning is the umbrella term for computational techniques that lets models learn from data rather than following strict programming rules. Implemented across a variety of branches, the practice is by no means limited to the giants. It is frequently used by banks to detect fraud, in the financial sector to predict stock movements and farmers can use it to separate vegetables. 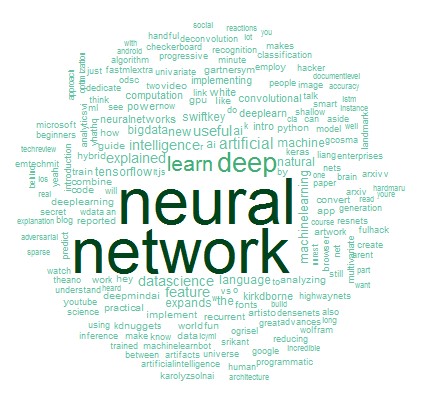 There’s even a case where data scientists from a large food chain created an algorithm based on shopping behaviour that detected a pregnancy before a teenage daughter found the courage to tell her father. He later found out when coupons were delivered to the daughter offering her discounts on exposing items.

How has AI progressed in the past few years?

The examples above all demonstrate the wide and powerful applications of AI in modern human life. The rise over the past decade has been strongly correlated with the increased processing power of modern computers. The progressions have made complex computations more accessible and allowed for AI-models to train on data-sets so large and multifaceted it wouldn’t have been possible a few years ago. The intricacy of utilised data sets and increasingly difficult applications have also created the need for specialised computer chips, tailored to allow devices to compute AI related tasks even faster. A mission several of the world’s leading tech companies have set out to complete.

Why is understanding AI important?

Operating in a business such as digital marketing that is by default part of the AI-revolution through its direct connection to one of the main contributors in the field – it is essential to understand what AI is and clarify some common misconceptions. AI has indisputably a big part to play in our daily lives and future, but the generic term Artificial Intelligence is more referring to the field of science and its objectives rather than its current state. Today we see a vast number of successfully applied algorithms that learn and estimate user behaviour from data, but the excitement has sometimes left its reputation precede itself. The hype surrounding AI, in particular neural networks and deep learning, has made them appear as magical black boxes to the public. The delusion is that we’re seeing intelligent machines that are well on the way of developing their own conscience. Something that, per several leading experts in the field, won’t be a case of worry over at least the next few decades (although opinions are rather divided on the matter). If ever, there will be quite some years before we get to experience our very own Westworld.

What is the cornerstone of AI - neural networks?

Breaking it down, neural networks are mathematical models inspired by the human brain. A common fallacy is that they are models of the human brain, which undoubtedly has accelerated the mystery surrounding the field. Neural networks, and machine learning in general, engage in two different phases. First is the learning phase, where the model trains to perform a specific task. It could be learning how to describe photos to the blind (shout out Facebook) or how to do language translations. The second phase is the application stage, where the finished model is used. For example, when Spotify sends you a discover weekly-playlist based on your music taste. In some cases the two phases can be integrated, for systems that never stop learning.

How do these models work?

What is considered intelligence in neural networks derives from the self-learning when the models are trained. During which, a neural network is commonly presented a dataset of inputs (whether it’s images, text or speech signals – it all must be translated to numbers) together with a true answer attached to each observation set. The model learns to estimate the true answer given the inputs it has been fed. The objective is that after such learning process the model should be able to generalize new unlabelled data. A simple illustrative example would be a circumstance where we have observations of mileage, age, brand, acquisition value and second-hand-value for a number of cars. Assume our task is to build a model that estimates second-hand-value. A neural network would learn to approximate the relationship between predictors (variables that predicts, i.e. age/mileage/brand/acquisition value) and a response (the variable that is subject of prediction, second-hand-value). Throughout learning it would continuously estimate second-hand-values and compare them to the true values. If the difference is large the model parameters are automatically updated to push the estimates closer to the true second-hand-values. The process repeats until the average squared difference between assigned- and true values is adequately small. The model learns how to estimate second-hand-value itself. 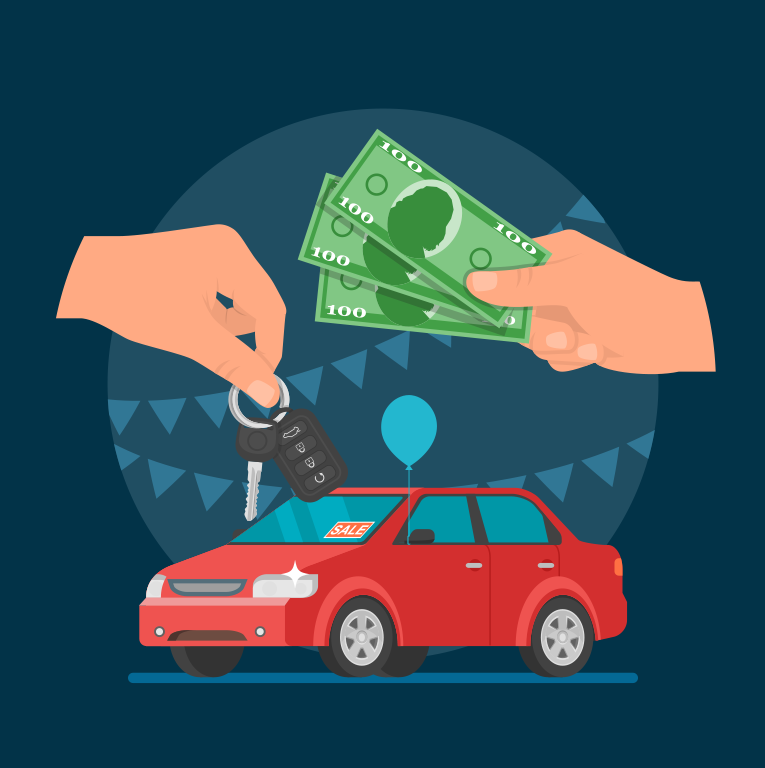 Employing on unseen data after learning, neural networks produce outputs based on similarities with the training data. Consequently, making the process of training essential for good performance.
To fully grasp, we need to evaluate the basic architecture. A neural network consists of several layers; an input layer, a hidden layer(s) and an output layer. Every layer consists of nodes, loosely modelled from neurons in the brain. 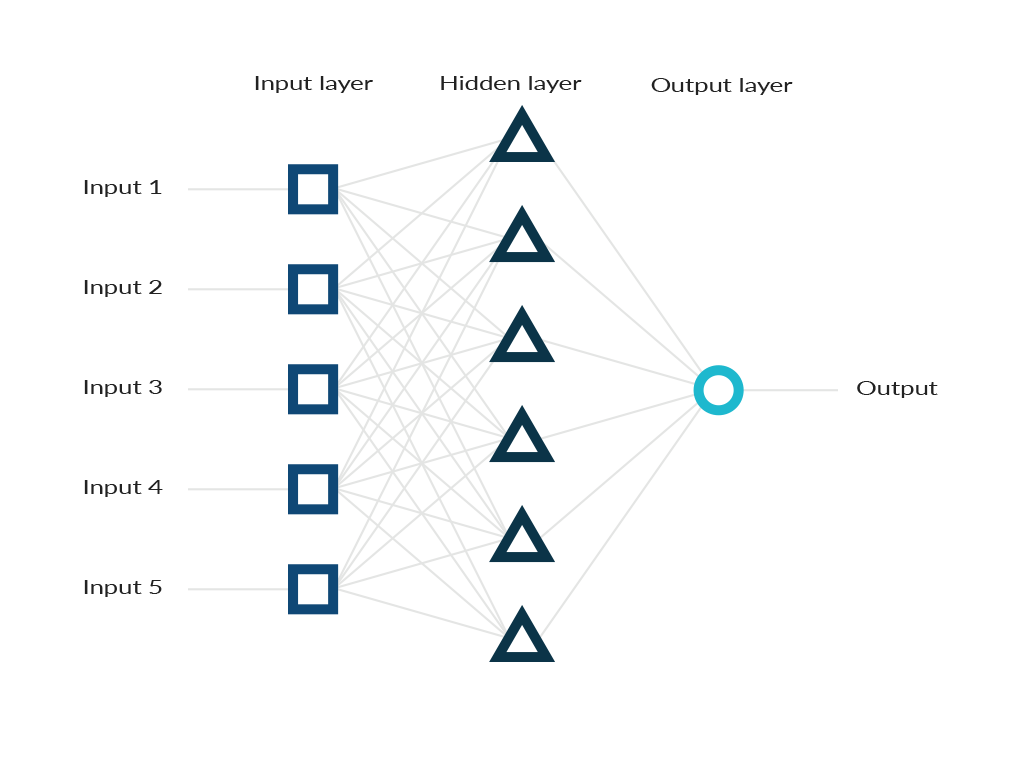 The input layer is where the predictors enter the model. As seen in the picture, every node in the hidden layer is connected with each input through the weights (lines in the picture). Weights are either augmented or reduced depending on its relevance to the output. A strong correlation with the output variable for a specific input would enlarge the weighting and vice versa. In each node in the hidden layer the weights products are summed and passed through an activation function. In the next step it’s resolved to what degree the signals from the nodes will progress further. I.e. to what extent it will influence the output. Further details about how neural networks function can be found on Deeplearning4j’s helpful site.
Going back to our car example, the predictors would pass into the model through the input layer. By the weights, linear combinations of the predictors would be constructed. The linear combinations would then be activated to non-linearity in the hidden layer. Then, non-linear combinations of the inputs are given the task to estimate the output – second-hand-value. This is done by continuously updating the weighting for each predictor and non-linear combination, in search for values that minimize the difference between true values and estimates.

The difference between neural networks and deep learning lies in the depth of the model. Deep learning is a phrase used for complex neural networks. The complexity is attributed by elaborate patterns of how information can flow throughout the model. In the figure below an example of a deep neural network is presented. The architecture has become more complex but the concept of deep learning is still the same. Albeit there’s now an increased number of hidden layers and nodes that integrate to estimate the output(s). 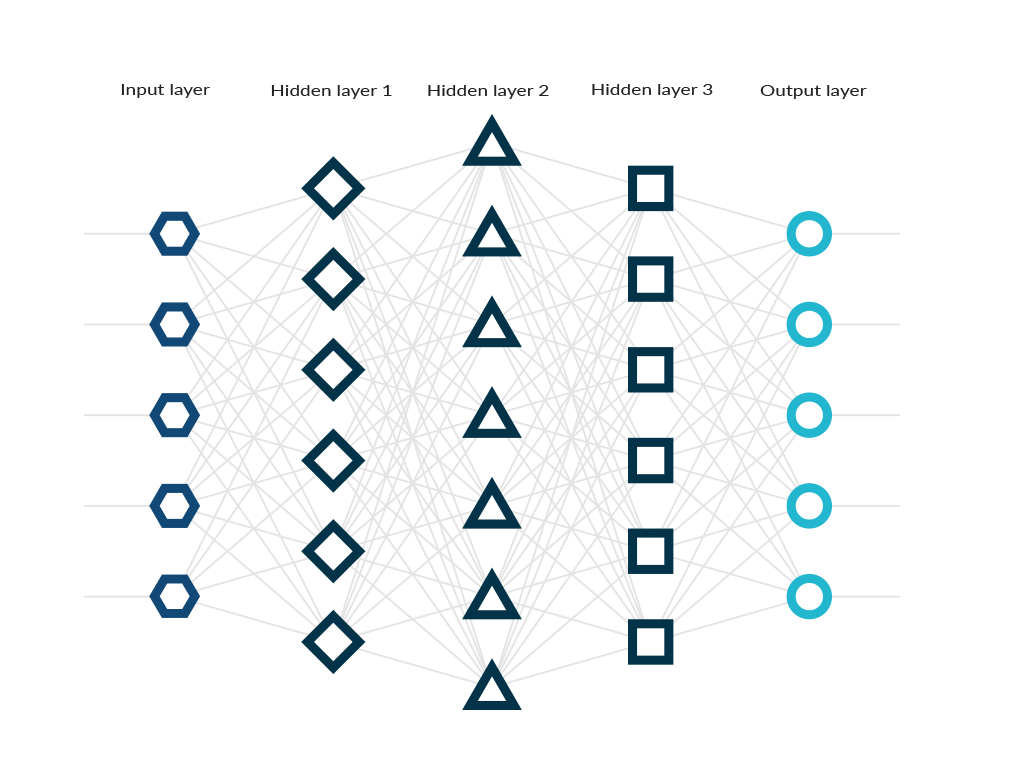 These are just two examples of how a neural network can look like. They come in numerous forms and varieties, depending on model objectives. For a quite extensive overlook of the different architectures and where they are best used, head over to Asimov Institute’s neural networks cheat sheet by Fjodor van Veen.
The idea behind AI and neural networks might be a bit hard to comprehend in just a few sentences. Considering, keep your eyes out for the future posts where we’ll take more thorough looks at AI, Machine Learning and other statistical tools - and how they can be applied in digital marketing.

The Best Talks from brightonSEO October 2022

Ayima Insights Club Get free personalised content and exclusive access to digital marketing resources and events. Learn More
JOIN INSIGHTS CLUB
We use cookies on our website to give you the most relevant experience by remembering your preferences and repeat visits. By clicking “Accept”, you consent to the use of ALL the cookies.
Cookie settingsACCEPT
Manage consent