The holiday season is basically here and there’s no turning back, but before we get into the full swing of it all, let’s take a look back at the biggest digital marketing news of October.

Earlier this month, Google announced their plans to finally lay Google+ to rest. It won’t happen all at once, though, as the company revealed that it’ll happen gradually through the next ten months and come to an end in August 2019. 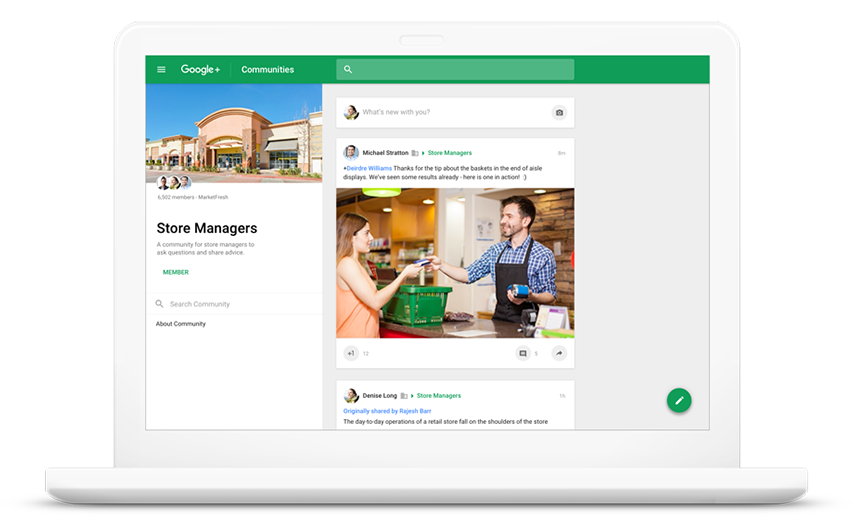 The social media platform has been a bit overlooked these past few years, to say the least, and never really gained momentum compared to its competitors following its 2011 launch. And in their decision to shut it down, Google noted: “The consumer version of Google+ currently has low usage and engagement: 90 percent of Google+ user sessions are less than five seconds.” They also pointed to a potential privacy issue, but they “found no evidence that any Profile data was misused.”

You can read more about Google’s decision to shutter Google+ on their tech blog. RIP.

As Barry Schwartz points out, there are essentially daily updates to Google’s search algorithm. That being said, he and others in the community have pointed to more substantial updates happening more frequently over the past few months, with a number happening in September and October.

The changes have led to notable fluctuations for SEOs who are reporting gains and losses in traffic, as well as eventual levelling off after some time. Schwartz wondered if this has to do with the bigger update that occurred in August and primarily seemed to target medical and health-related sites.

Whatever is causing all of this, we’ll be sure to keep you posted if more noteworthy updates roll out in the coming months.

As you may already know, Google loves testing, they have rolled out a feature that basically lets you see what you’re searching for without ever having to click through to a website. That is, of course, if you were one of the users who actually saw this feature being tested.

According to Twitter, some Google search users who clicked on sitelinks weren’t taken immediately to the page but were instead served information taken directly from the page. Think next-level featured snippets that, if implemented, could certainly frustrate webmasters who would much rather have that direct traffic.

Looks like #Google is testing a new SERP feature (Extended Site Links?). This feature was spotted in the middle of the SERP, not on the top position ? Has anyone spotted this before? @rustybrick @sejournal @sengineland @TheSEMPost ❓ pic.twitter.com/WxRmqe9S96

You may have noticed some delays if you were trying to generate reports in Google Search Console this past month. But the good news is that the team at Google were fully aware of this issue and were working on fixing it.

Specifically, on 17th October, the Google Webmasters Twitter account revealed that there were a number of hiccups in the reporting pipeline. The tweet also clarified that this would have no impact on search rankings.

Some Search Console reports are currently a bit more delayed due to issues in the reporting pipeline (AMP, Rich Results / Structured Data, Hreflang, Index Coverage, & Mobile Usability). This doesn't affect your site in search. We'll let you know when things are back up to speed!

Exactly one week later, the accounted tweeted a thread about the various bug fixes that Google worked on to improve Search Console so, hopefully, everything’s running more smoothly by the time you read this.

As of this month (October), Facebook Pixel has implemented first-party cookies for tracking and collecting user behaviour. This move generally gives a website owner more control over the data being collected, and it’s a shift away from pixels relying solely on third-party cookies over the years.

Ayima Head of Paid Media Ian Hyde explained that this change shouldn’t have any impact on campaign performance or tracking. However, first-party cookies should provide more accurate and robust data compared to their third-party counterparts, he said.

It’s important to remember that this will happen automatically, which means you don’t have to do anything to switch. If you’d like to avoid this, though, you can opt-out within the settings tab of the Events Manager.

Google revealed a new version of their Shopping Insights Tool this past month, and it offers quite a bit more information compared to the previous iteration that rolled out in October 2015. Whereas that version compiled data related to more than 5,000 products, the new Shopping Insights has information on more than 55,000 products, 40,000 brands and 5,000 categories. 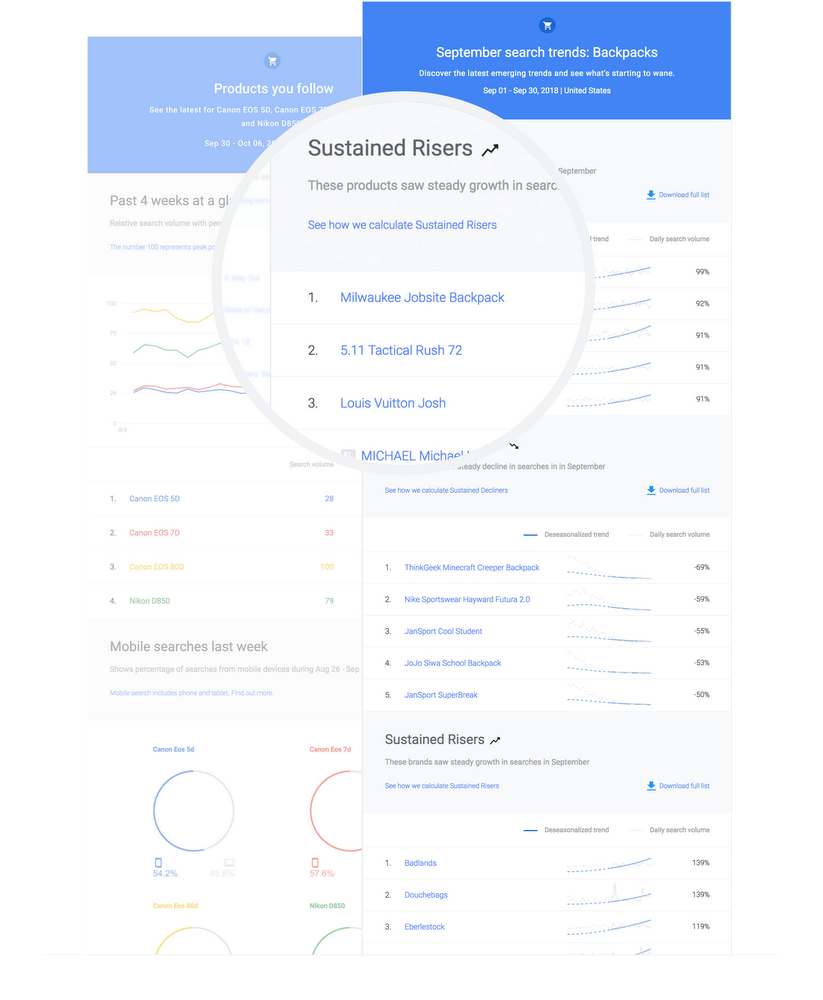 That’s quite a bit of data for folks in the ecommerce space, but it doesn’t end there. Google also allows users to create up to 10 weekly or monthly reports based on the products, brands or categories you’re following. Those reports will be delivered right to your inbox, and they actually vary based on whether you choose weekly or monthly.

You can start using the revamped Shopping Insights, just bear in mind its only data for the USA.

At Advertising Week New York in October, YouTube announced quite a few new platform updates for marketers to be “effective full-funnel storytellers” which all resulted from the combination of YouTube’s platform and Google’s machine learning solutions. But what does that really break down to?

For starters, they’ve rolled out a wider variety of ad extensions similar to those in Search ads. These let advertisers push additional, relevant  information to increase engagement and drive lower-funnel conversions within YouTube. Also, for all you film buffs out there, you can see the next showtime for the new movie trailer you’re watching.

To help with accurately measuring video campaigns, YouTube are also apparently vamping up their Brand Lift solution with the ability to set up the reports right in your Google Ads or Display & Video 360 accounts so you have a full view of all your ad metrics.

Both developments are further evidence of YouTube’s drive to optimise their ad offering across the acquisition funnel- In particular, to improve their performance marketing offering to drive “real business impact all along the customer journey”.

With brands continuing to focus on video in their advertising strategies, it’ll be interesting to see how these changes are implemented moving forward. More on that later!

Pinterest made a couple changes this past month to the way their users can shop through the platform and how they can discover new ideas.

On the shopping side, the path from pin-to-purchase became a bit more streamlined thanks to Product Pins (formerly known as Buyable Pins) that Pinterest said will be more discoverable in the home feed and search results. In addition to showing opportunities to buy the item you’re viewing, you can see similar available products. Other updates include a new shopping shortcut available for U.S. iOS users to start. 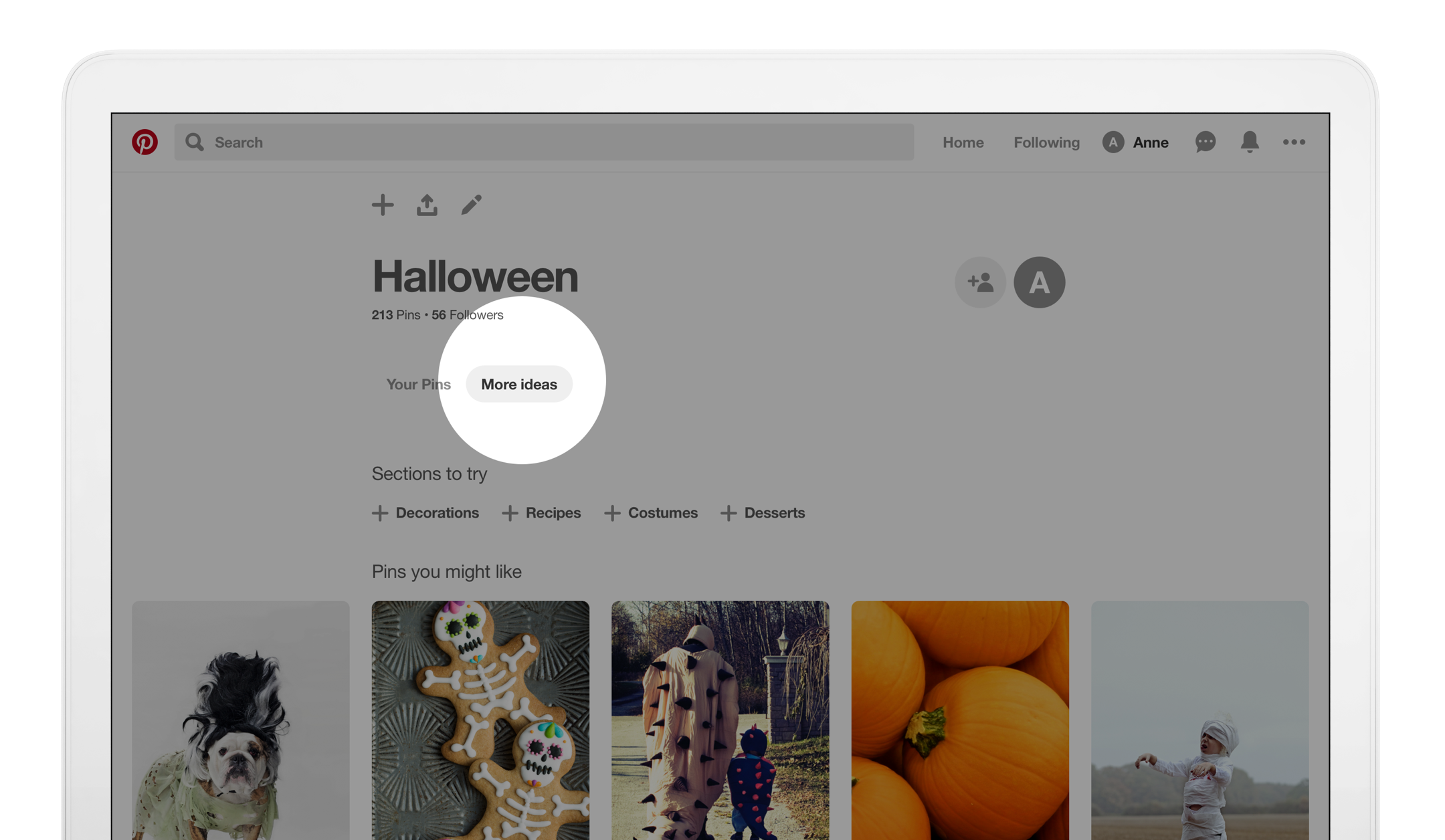 As for the ideas bit, Pinterest added a “more ideas” tab that, well, does exactly what you think. It provides recommendations based on the ideas you’ve saved on the platform, along with “Sections to try” that aim to help with organisation.

Have you tried out these updates yet?

Instagram made it even easier for people to follow each other by releasing the “Nametags” feature. Now you no longer have to try to communicate your potentially complicated (or embarrassing) username, because you can create your own personalised Nametag that other users can scan with their phones to instantly follow you.

While that feature is available worldwide, Instagram’s new school community-specific feature has only been released for a group of U.S. schools. Users who attend a specific school and choose to join can list any relevant information (class year, major, etc.) and then find other people in their school through a directory.