Believe it or not, we’re already heading into autumn and you know what that means: getting ready for the holiday rush. But before we get there, we have some news to share from the final days of summer.

The big names once again ruled the headlines this August, as Google and Facebook both had some rather interesting bits to share. For one, Google are indeed getting ready for the impending holidays with updates to their travel features. As for the social media giant, they’re offering more transparency with their advertising and trying out a few new things on Instagram.

Read on to learn more about these changes and everything else that shaped the digital marketing landscape this past month.

Google have taken another step toward getting users the information they need faster than ever, and they’ve done it through newly expandable featured snippets. Previously, a featured snippet may offer a definition or similar information related to your search query. But now, certain queries will bring up a host of readily available facts, tips, etc. that can completely cut out the need to click through to a site.

As Google notes on their blog, a DIY enthusiast searching for [quartz vs. granite] will be presented with a number of factors weighing the materials against one another. These include the cost, benefits and literal weight of using quartz versus granite, and this information is easily accessible via clickable drop-downs.

Could this new version of featured snippets make reaching “position 0” more beneficial for webmasters and users alike? We’ll keep an eye on it.

Google are stepping up their travel game with the release of a few user-centric updates that aim to make booking flights and hotel rooms easier and cheaper around the holidays. First, there’s the Travel Trends tool that displays the most affordable days to fly around Thanksgiving (in the U.S.), a few holidays in December and New Years. You may find that it’s better to depart a day or two later than planned to save some money on airfare, for example.

For Thanksgiving specifically, North American users searching for flights on Google will find a handy way to see how their flight price stacks up with “Price Insights.” And it’s quite simple, as you’ll be presented with a note indicating if the price is low, typical or high based on historical data. This same feature is being added to hotel bookings as well.

Outside of the holidays, Google have also worked on the “Explore” section of Maps so that users can, well, explore the world more easily. Similar to Price Insights, Explore now includes notes indicating if a deal is good or not with green text.

You can read more about Google’s latest travel updates here.

If you’re a verified Google Analytics owner who has struggled with the verification process for Search Console access, Google want to make your life easier. They’re implementing automatic verification that will do away with the manual steps you once had to take.

However, it’s important to keep in mind that you need to first meet the Search Console ownership requirements. With that all set, you’ll be ready to access Search Console and take advantage of its features, primarily viewing how a property is performing in the SERPs.

You can also opt out of this automatic verification if you’d rather not have access to Search Console. To do this, all you have to do is delete the property in question from Search Console. And just in case you have any questions or want to know more about how these products work, you can always hit up the Webmaster Help Forum.

Google are looking for ways to simplify the process of making effective responsive search ads, which are still in their beta phase. At least, that’s the goal of the company’s latest batch of updates announced in late August.

The biggest change is the upcoming addition of an “ad strength indicator” that’s exactly what it sounds like. This new feature basically rates your ad copy on a scale of “poor” to “excellent” based on three elements (relevance, quantity and diversity). It also provides some recommendations on how to improve your score (like “Add more headlines”) when it fully rolls out over the month of September. It will be available for responsive display ads at a later date as well. 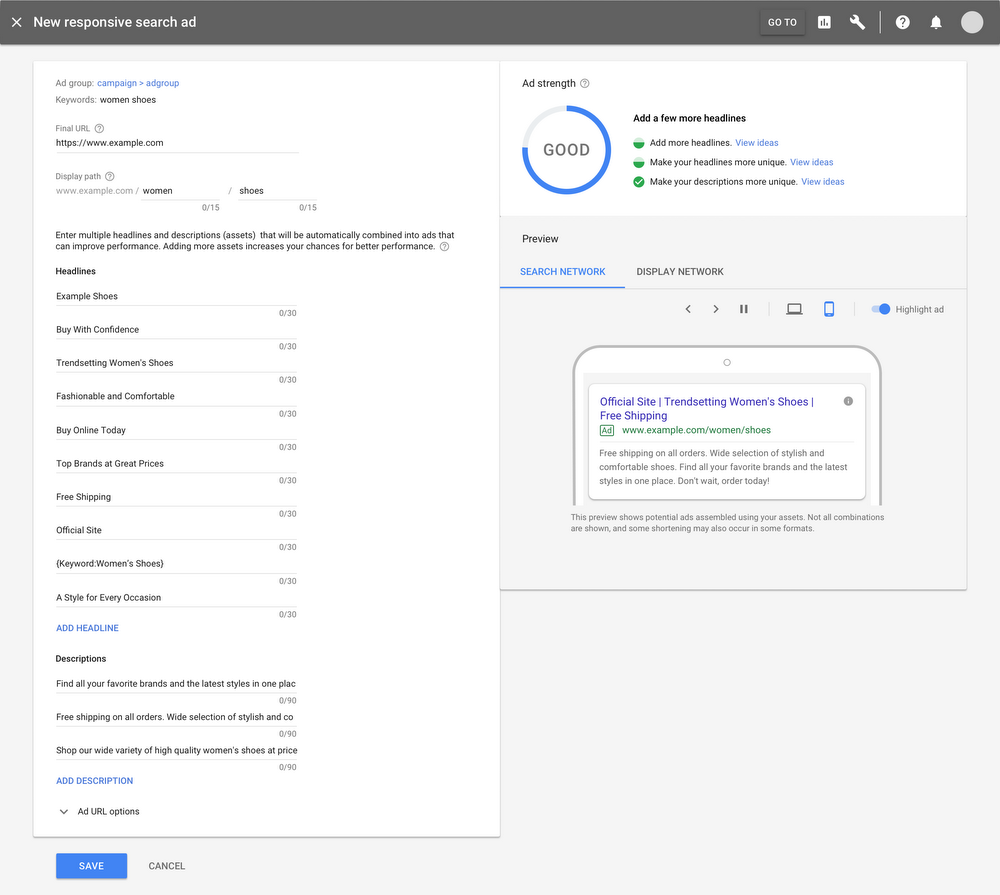 Google also introduced new reporting features for responsive search ads that showcase the “headlines, descriptions, and top combinations” of your ads. You can now preview ad combinations during the creation process, too, so you can make sure everything’s up to snuff before making them live.

You can read more about the changes and how you can take utilise them at Google.

If you’re constantly on Instagram—whether for work, pleasure or a bit of both—you may have noticed something new in your feed this past month. Starting on the 20th of August, the popular photo app began testing a new feature called “recommended posts,” which are exactly what they sound like.

Much like Twitter has done in their own feed, Instagram automatically shared posts from other users that they deem relevant to your interests and activity. During this trial run, they appeared at the end of your most current feed, and you could either view these curated posts or go back to what should actually be in your feed.

Instagram wrote that their plans are to go through the user feedback they received after this trial to figure out how to best incorporate recommended posts. They also said they have plans to do it again, so keep an eye out.

Facebook introduced a new feature, the Ad Archive API, this past month that aims to curtail advertiser abuse and provide transparency, particularly with political ads. When accessing the API, journalists and researchers can see all of the data related to the ad, including the total spend, number of impressions, and target audience.

The company said that, so far, they’re impressed with what “watchdog groups, publishers and academics have unearthed” within the API. They added that they’re hoping this level of analysis will “increase accountability for both Facebook and advertisers.”

While it’s only available to a select group of researchers right now—mainly researchers and publishers—you can expect wider access to the API in the coming months. Learn more about the API and how you can receive access if you’re interested at Facebook.